The Stingless Bee widely known in Malaysia as Lebah Kelulut is a species of bee that is found in the tropical and subtropical regions of the world. They belong to the Melliponula genus and are distinguished by the ferruginea species.

The Kelulut Bees store their honey into a hive which is not like any ordinary one. Their hives are usually based in a hollow tree trunk or hollow branch. The hive only has one entrance and one exit flowing through one passageway for the bees to transport their honey. 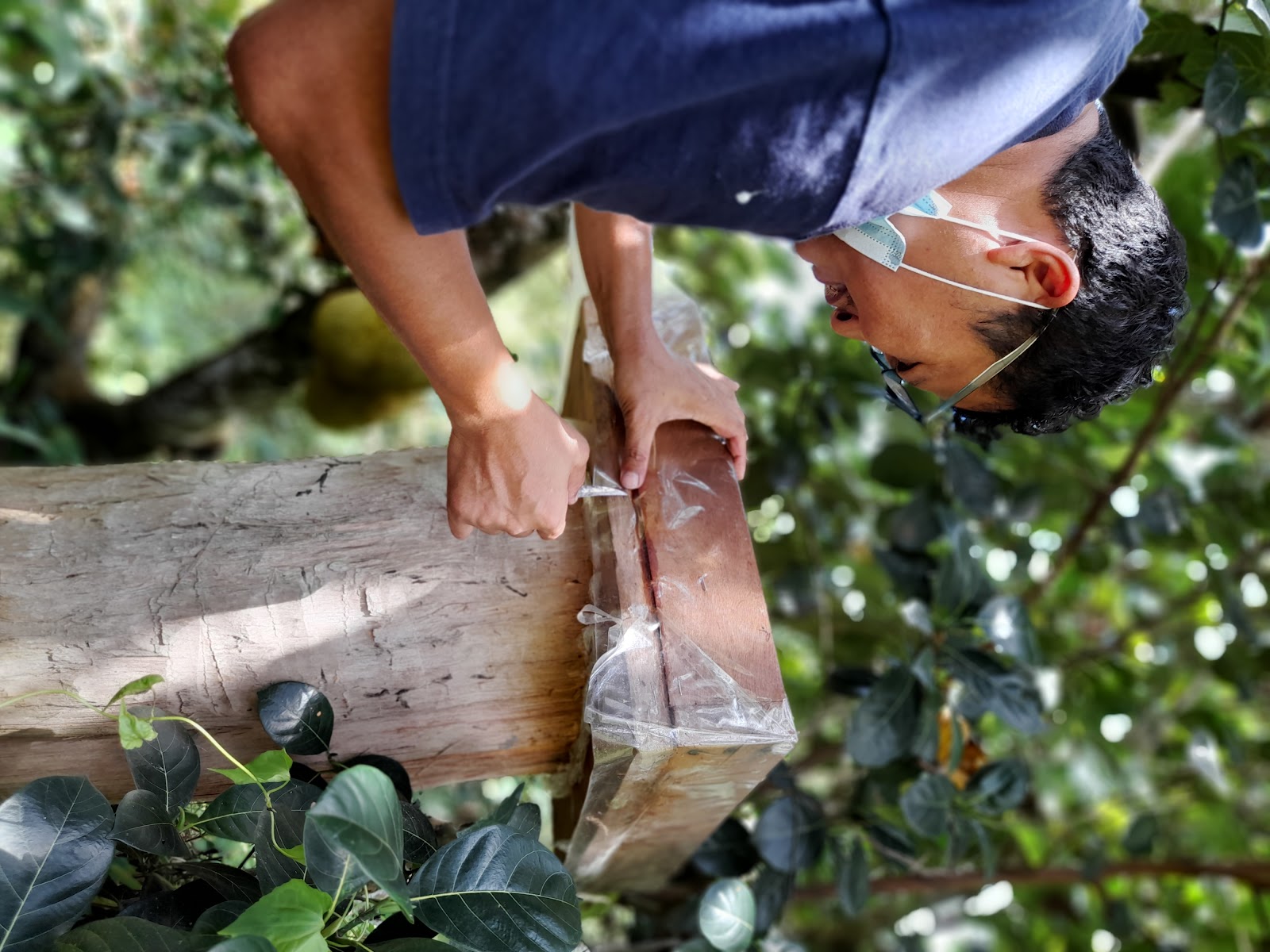 Mr. Saiful takes charge of a Kelulut Bee reserve at the Bukit Jelutong Eco Community Park located in Selangor, Malaysia. In the photo above, Mr. Saiful is removing some staples that are punched into the wooden frame so the protective plastic film can prevent the honeycombs inside from being exposed.

The Kelulut Bees are active all year round except during cold periods. The tropical areas are usually near the equator where temperatures remain above 20°C normally. 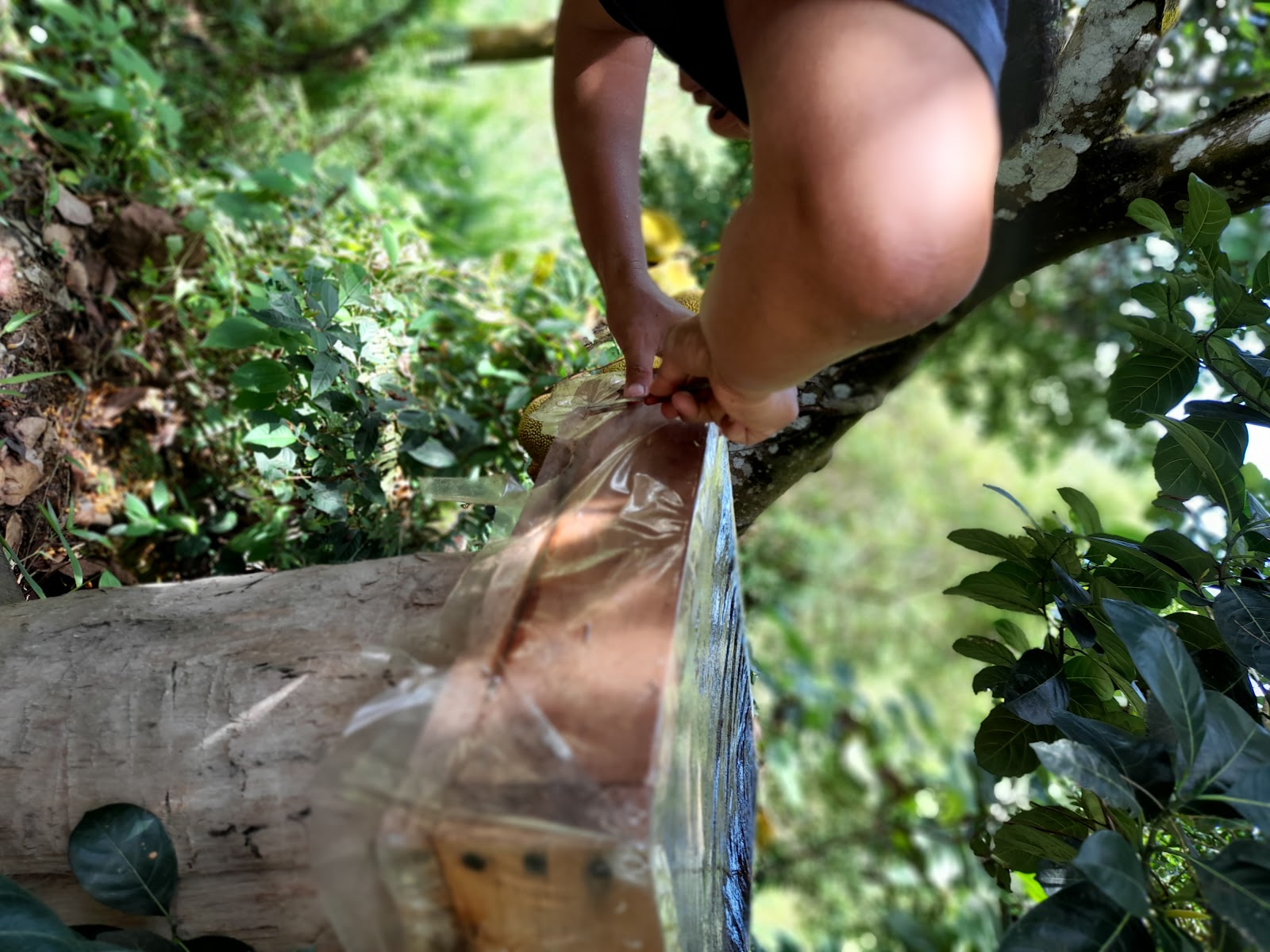 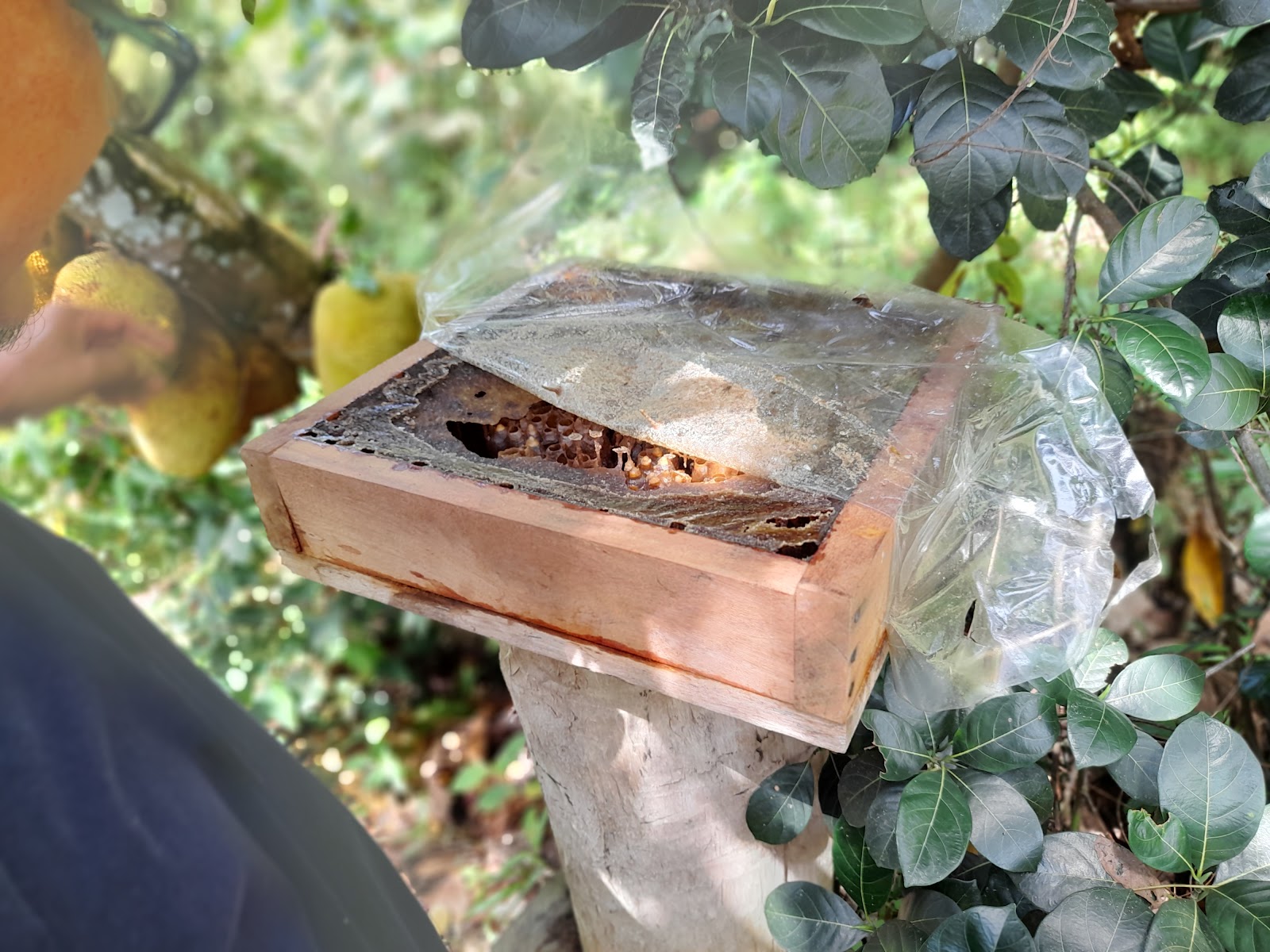 The protective plastic film is opened halfway so it is easy to seal it back after extracting the honey from the honey combs. 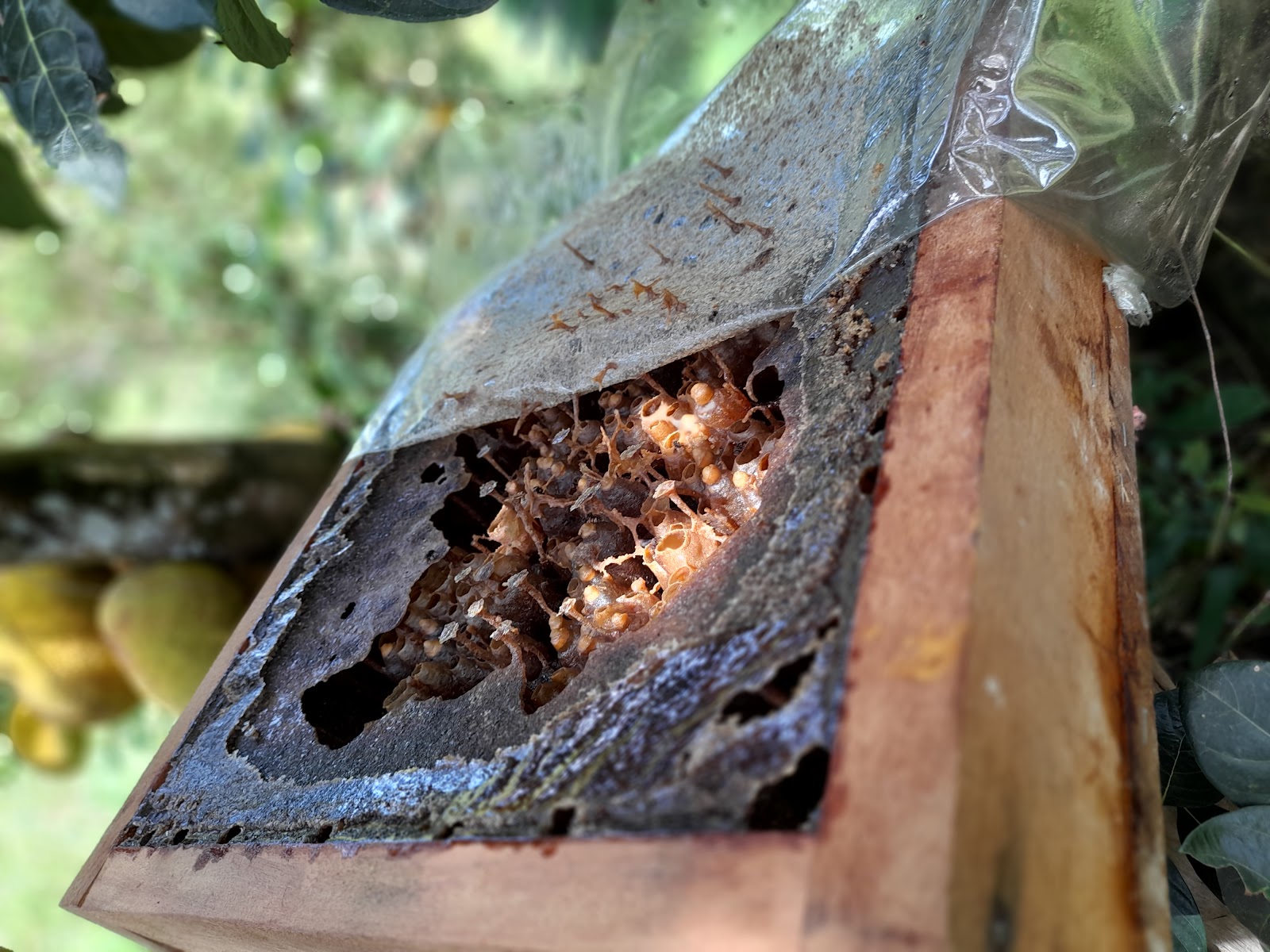 The surface of this colony engulfs the honey comb coated with bees wax. The wax is brittle and quite sensitive to touch. 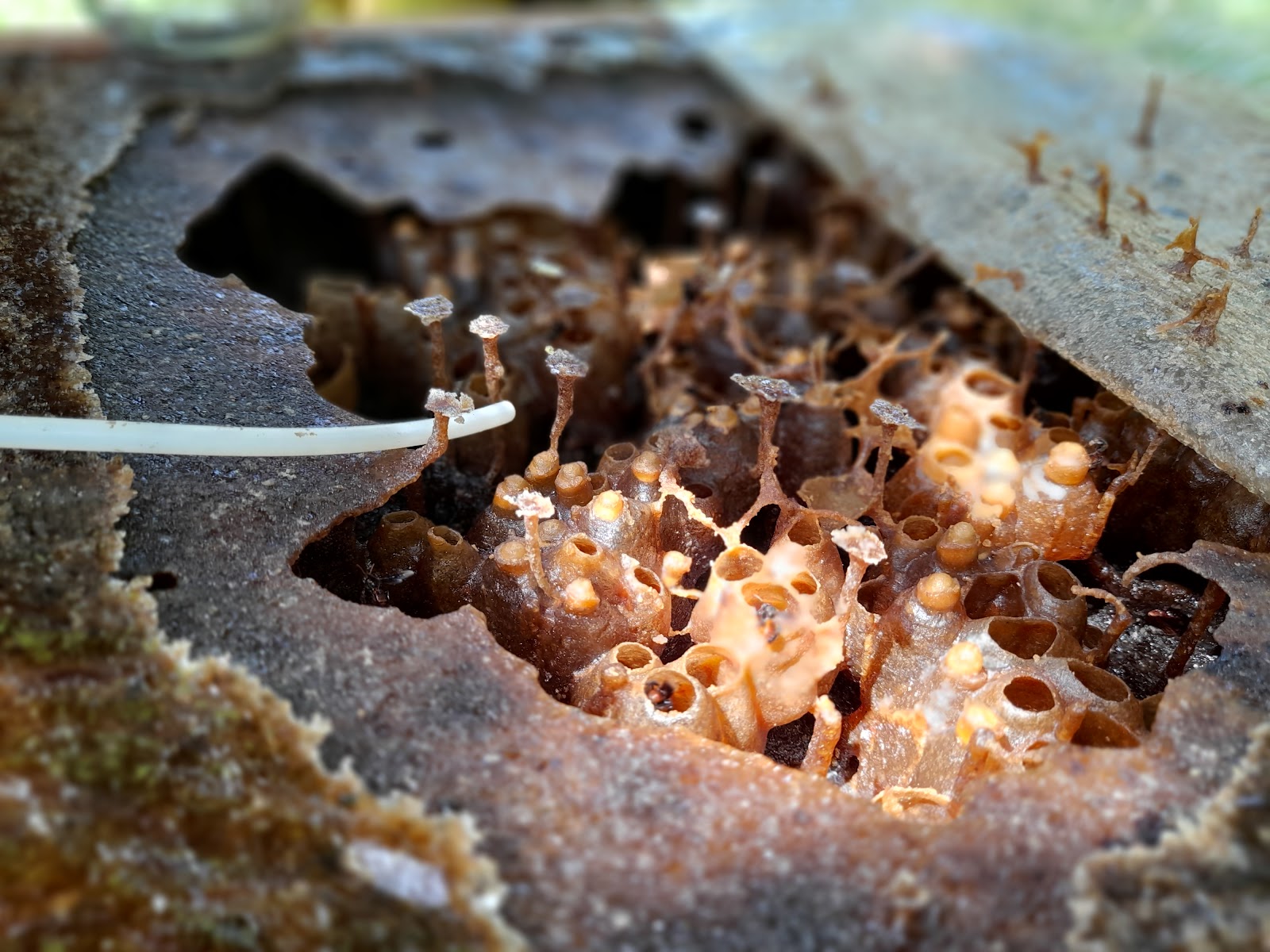 The Kelulut Bee reserve here in Bukit Jelutong, holds more than 20 hives. Although the hives of Kelulut Bees are relatively small compared to other species of bee hives, the colony could store up to 4

The picture above shows a tube entering a hole also known as the pots clustered in groups allowing it to extract honey within the honey combs. The tube is carefully placed into the pots for extraction. Each pot carries proportions of honey that is required to fill the hives’ full capacity, so extracting the honey from multiple pots is necessary for large-scale extractions. 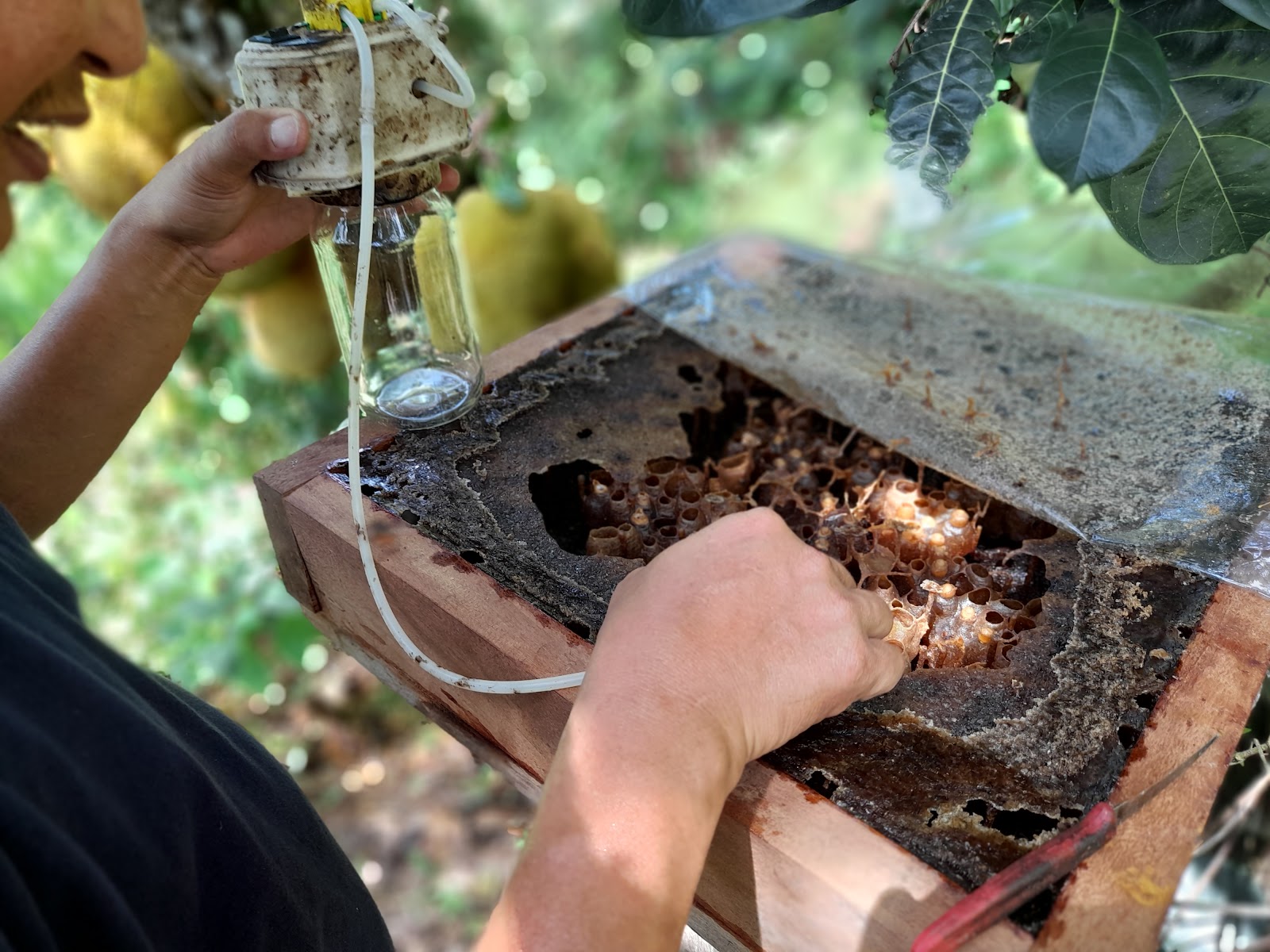 Mr. Saiful uses a honey extractor which is attached to a jar to siphon

the honey from the honey pots.

The honey extractor contains a mechanical rotary system that helps decrease the volume of the tube by its cross-width so air pressure can increase making it easier for the tube to transport the honey into the jar. The machine is very easy to clean. To clean it, the cover can be removed so the tubes can be taken out to have an internal cleansing, so the honey that is extracted can remain safe to eat 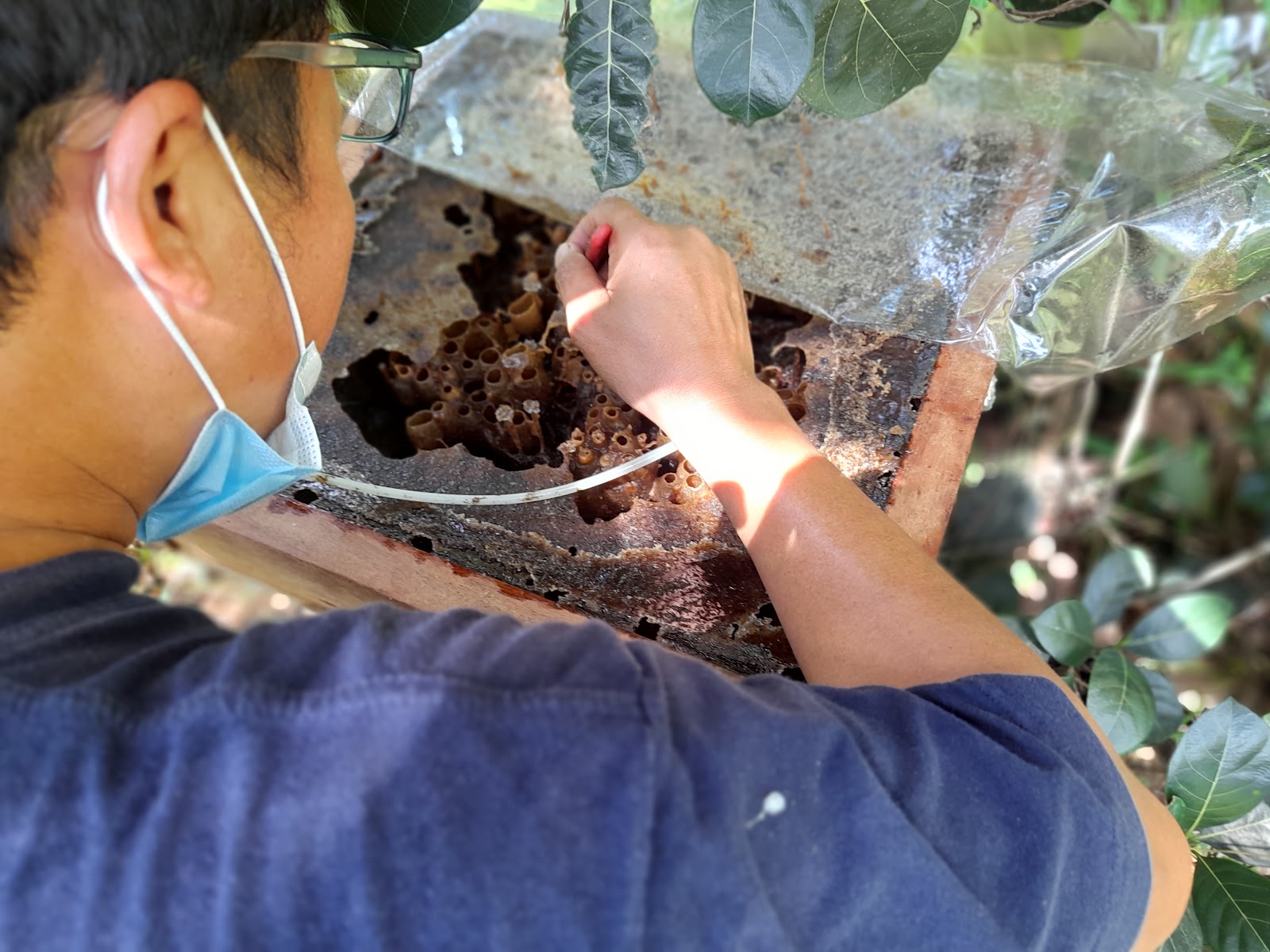 Mr. Saiful uses this pen knife to pick at certain parts of the honey comb so the tube from the honey extractor can fit into the honey pots for extraction. 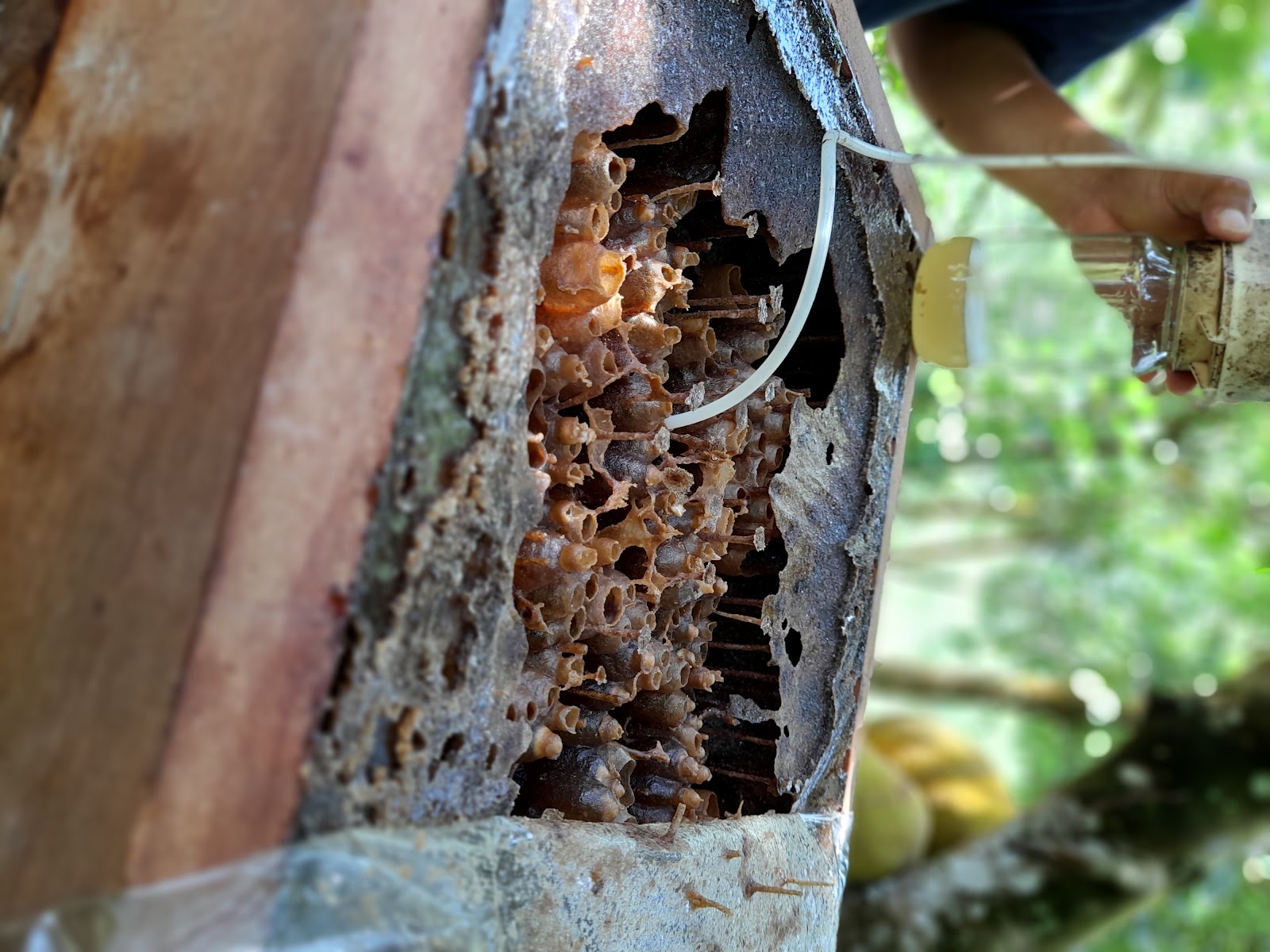 The Kelulut Bees may be stingless, however, if threatened they have been known to bite. Their jaws are incredibly strong that it can penetrate through human skin. The Kelulut Bees colonies normally house about 300 bees with most of the “drone” bees constantly moving in and out of different colonies to fill up the honey pots in the honey combs.

The Kelulut Bees also have some defensive strategies despite not being able to sting any intruders or opposition, they also have a soldier role in which some of the bees defend their colony by guarding its entrance. The queen bee supervises the colony and they can be simply recognised if its abdomen is large or often swells, because it contains the most pollen than any other bee in the colony. 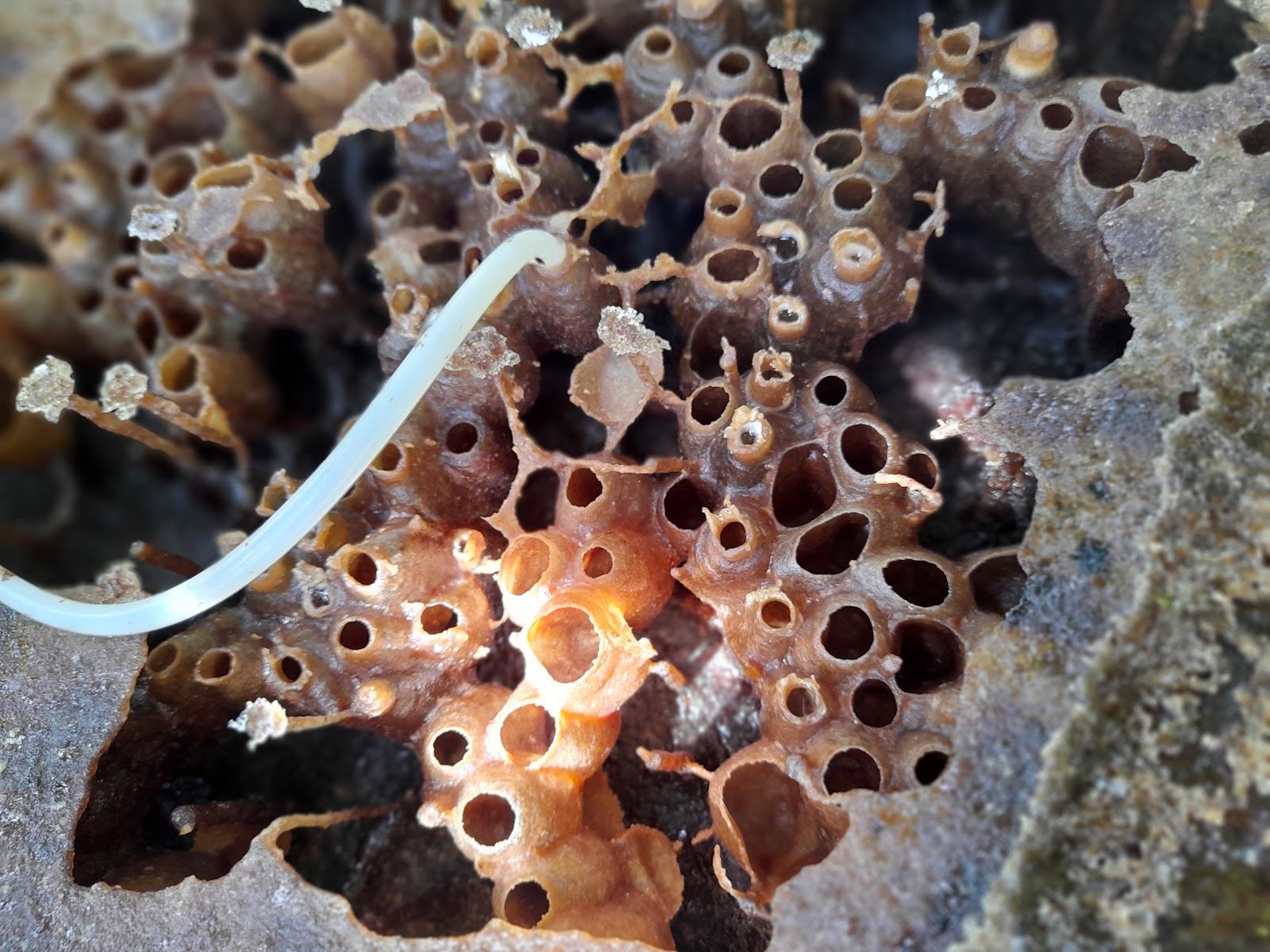 The honeycomb has an irregular structure with its honey pot cones dispersed in clusters from every area in the colony. The radius of the cones are really small and circular unlike most  other honeycombs from different bees. It has a smooth texture and brown appearance resembling a more caramel like colour than chocolate.

The honeycombs also have sticks that have a base protruding upside down where the part with a larger surface area faces upwards. These stick like objects are chewable and can be sucked upon until the sweet, bland taste is drained out. The honey stick can help treat cancer and it can also be used for medical purposes. 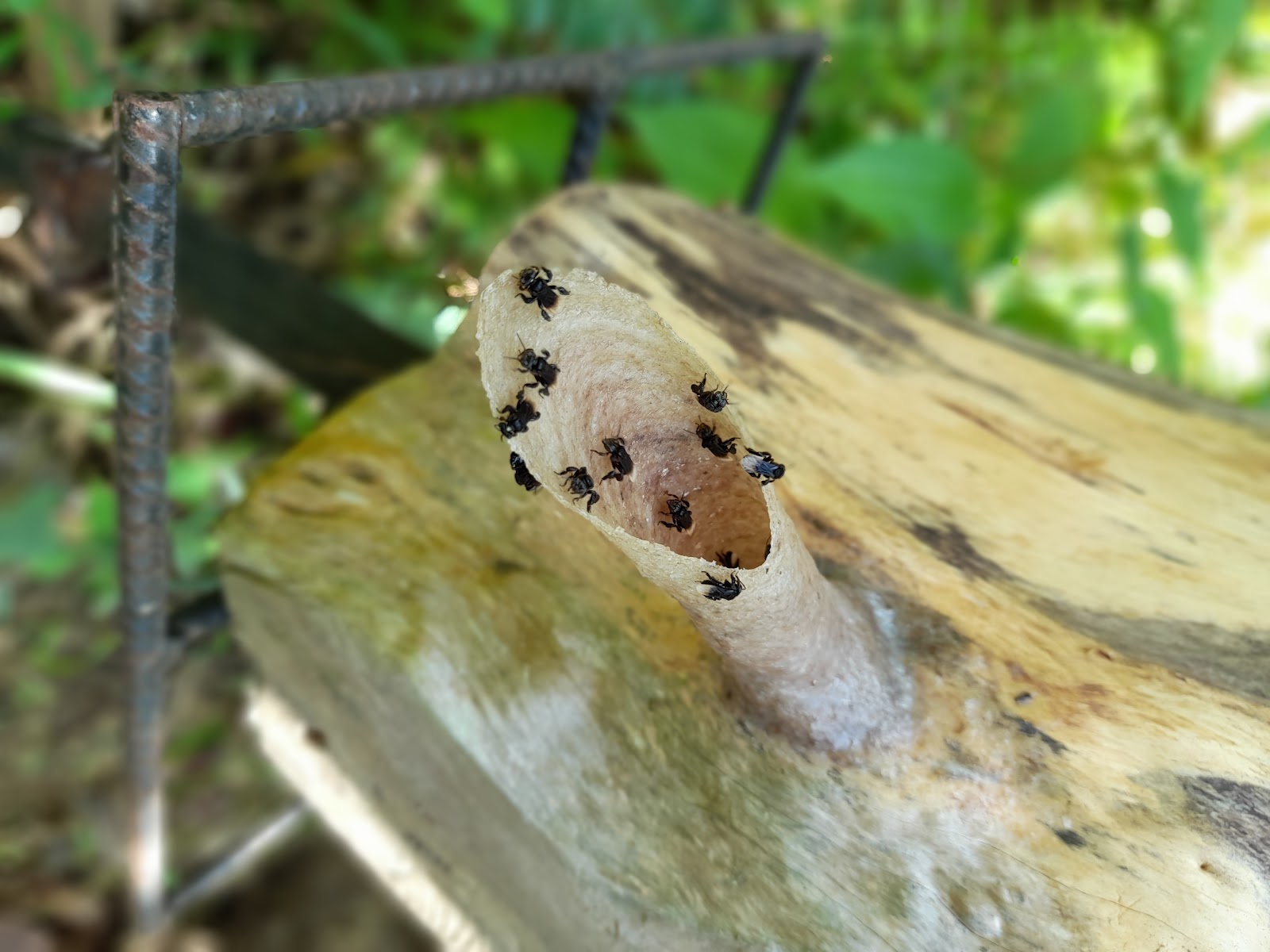 In this picture, the entrance looks like a hollow tube leading into the hive. It is one of the more complex entrances, as most entrances aren’t as prominent and thin as these. The bees at this entrance are the soldier bees which camp out at the entrance to guard their colony, they may have the strongest bite among the rest. 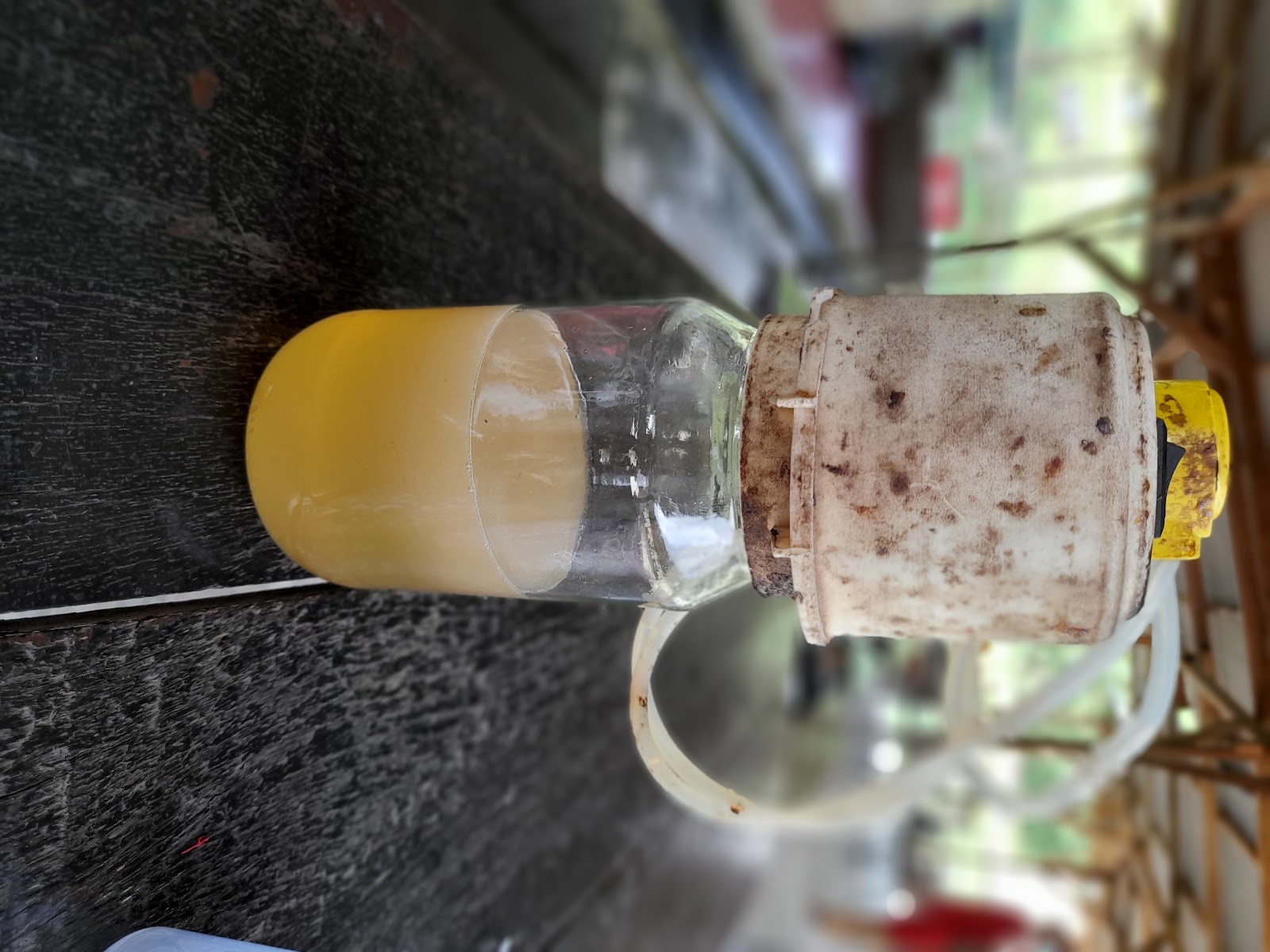 After a certain amount of honey is extracted the honey has a yellow transparent appearance with a tiny amount of froth floating on its surface. In this jar it appears to be containing approximately 250 ml of the honey. Noticeably the honey extractor is still attached to the jar.

The honey from Kelulut Bees is a very healthy source of medicine to treat sick people. The honey tastes mildly sweet and has a piquant end taste to finish it off, and unlike most honey, it happens to not be thick and rather as if it has been diluted.

Aside from medicine the honey is also used for an alcoholic drink called Balché originated from the Mesoamerican regions of Central America. In countries such as Mexico, Belize, El Salvador and Honduras, these drinks are produced from the honey which is fermented and later on brewed. Beekeepers tactically place the bee hives close to Leguminous Balché Trees so the Kelulut Bees will most likely pollinate the nectar from there so the production rates for the ingredients to make this drink can be maintained.

The honey is widely regarded to be used for medicinal purposes to treat diabetes, asthma and sinusitis.

The wax from the hives of the Kelulut Bees is also used for decorative purposes. The wax can be used to coat jewelry or smeared onto art pieces whereas it will harden, so artists must be quick to finalise their designs as this wax can work like glue.

Should Young Children Have Smartphones?

When the English learning centre, Sri Kayangan Montessori, moved to...

The Stingless Bee widely known in Malaysia as Lebah Kelulut...

It is clear that electronics has had a major effect...